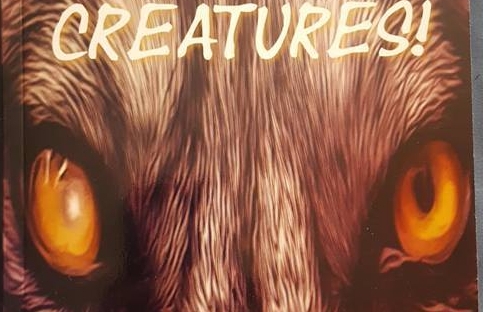 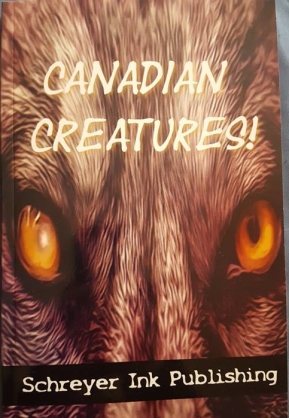 I was asked to do this review in May and due to health concerns I am WAY behind in posting it. SO I do apologize.

This is an anthology of stories about Canadian Mythological creatures. The stories were written by seven (7) different authors and they all have very different styles. It was an interesting read, and I gave it 4 Tardises because on the whole I was very impressed with it. there were one or two that I just couldn’t get into, but that is a difference of style and not a reflection on the author. I am going to break this down by story.. and there are NO spoiler alerts needed.

The Silence Between the Moons by Peter Foote

The plot of the story is reminiscent of Poledra and Belgarath from David Edding’s Belgariad and Mallorean series. It is not written in a point of view that allowed me to easily identify with the main character . To me it seemed more like a book synopsis than a story particularly with the sparing use of pronouns. That being said, I liked the plot over all and the ending was fitting as well.

Uphill All the Way by Holly Schofield

Highly descriptive prose that allows the reader to fall into their own imagination. I did have to look up a few colloquialisms but that is part of the intention of this anthology, to bring to life Canadian culture and idiosyncrasies. It was also enlightening for me to read about the replanting efforts for loggers in Canada. Also, I enjoyed the fact that the entire story is a metaphor about diversity and symbiotic relationships.

Eyes on the Lake by Alyssa Theissen

This story should be developed into an novel! Well written and descriptive it was a plausible interpretation of two (2) very significant creatures in Canadian culture. The characters were believable and even in this short format fully developed.

Into the Boreal Wild by Jennifer Strassel

An interesting tale about a creature I had never heard of before. There was one plot hole, but not large enough for it to be distracting. The author did an excellent job of using descriptions that awakened the reader’s five senses. However, I felt as though the end were rushed. Like the author and the story had more to do but there were word count parameters that they were attempting to fit in.

Don’t Get Many Round Here by Dan Allen

Wow! What a story! The author definetly needs to develop this into a full book! The sory was face paced and full of the wait.. what??? moments that I LOVE in a thriller/adventure.

Adventures in Another Wonderland by Alex McGilvery

As the title implies, this is re-telling/re-imagining of a classic tale. I like stories like this that are well written and clever. There are creatures in this story that aren’t mythological though so it stand out among the other tales. Still well done!

If Wishes were Pennies by Sarah Walker

I liked this story. I liked it a lot. However, even as studied up on Mythology and fey folk as I am, there were WAY too many terms that had to be researched. Moreover, the terms weren’t necessarily Canadian as the were a hodge podge of various cultural pantheons. A short story doesn’t allow the time needed to define these races and creatures the way the author needs to. I would love to see if this would work out better if Ms. Walker developed this into a novel or even a series so that she had time to declare and expound on each race represented.

Hide and Seek by Casia Schreyer

This was a great story! It was action filled. Another mythology I knew nothing of. I truly want this developed into a novel or novella. I think it would allow the author to better explain why the main character is helping humans. Well done!

If you have knowledge, let others light their candles on it ~ Margaret Fuller